In Using a conda environment I mentioned that I’d previously been able to use the “Environment script” section of the SWAN startup to configure a custom Jupyter kernel. In my case, I simply installed a conda environment into my $SCRATCH_HOME directory at startup to include a newer version of Python and a few key packages. @dalvesde said that he would be interested in the approach, since there is some planning work around “environment scripts” and even providing conda environments, and that it would be good to get an example of what you can already do if you know your way around the ecosystem.

In that light, let’s go step-by-step the approach I took. First, I created a script in my homespace that I can reference in the SWAN configurator screen (the one before your Jupyter environment has been loaded). For the record, as somebody who doesn’t know the CERN infrastructure too well yet, I originally was creating these files by starting SWAN and modifying them with nano in the web terminal. I realise now that I could have just logged on to lxplus.cern.ch and gone to /eos/home-p/pelson.

The steps that I needed:

A few screenshots to show the workfolow: 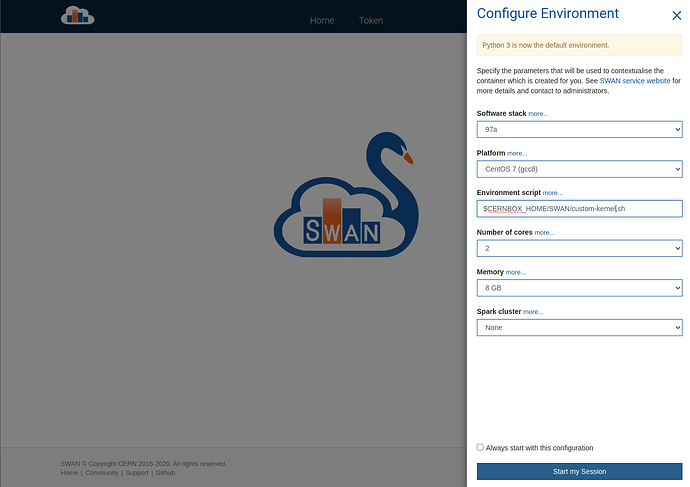 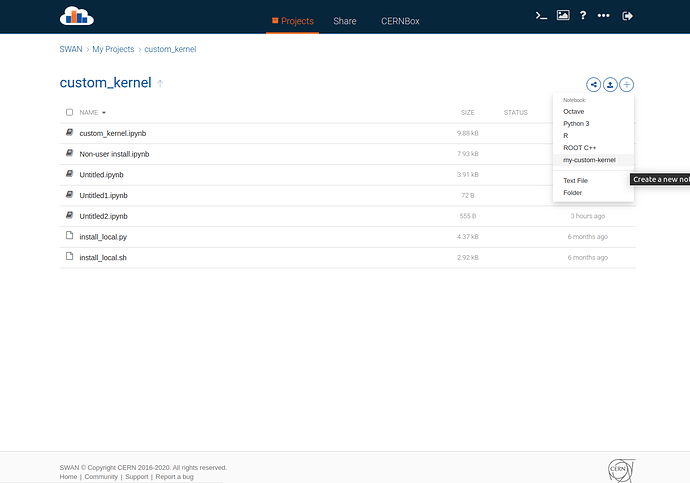 To be completely clear, I want to stress that I consider this a bit of a hack and I do not endorse doing this. I’m posting this in the interest of transparency to demonstrate what is possible today in the hope that it will be useful to the SWAN maintainers in the hope that they can integrate the custom workflow into the SWAN service. One example of the costs of the approach is the amount of data which is being downloaded/installed per SWAN session (the order of 500MB for a basic Python environment with conda) - this is the kind of thing that we could have a common cache for such that all users on SWAN can re-use the same downloaded binary artefact.

@dalvesde I’d be very happy to be involved in any requirements gathering / prototype evaluation when you start planning/implementing custom environments in SWAN. If you have any questions, or just want to chat about these things, just drop me a line